Looking back at last year’s Christmas photos it seems like an eternity has passed: From family lunches with friends and relatives to music concerts to New Year’s Eve parties. The current limitations due to COVID-19 means that, for all Italians it will be a different Christmas 2020 in Italy, but no less special than the others. To keep the memories alive and remind me how lucky I am, I will share with you some of the traditions of Sorrento at Christmas which this year, is of course in a much more reduced form, however I will continue to live with enthusiasm and happiness over this Christmas Holiday Season.

Last Christmas there were thirty five of us, and the one before forty, together around the Christmas table. Legends tell of families of up to seventy people who cook for days and days to be prepare and get ready for the big day. This year will no doubt be a tough one, never in my life has there been a Christmas where I have not spent it ‘in my family and by family’ in Italy, this is a very broad concept: from parents and children, brothers and sister, in-laws, grandparents, uncles, cousins and all the other distant relatives you only see this one time a year, during the Christmas holidays.

My memories include asking for extra tables and chairs from our neighbours so that we sit can all together around one large table. For my Grandmother this is everything she wants, to be all together at Christmas because this is truly the meaning of this festive day. Instead this year, we have set up a webcam connected to our TV, so in between course we will be able to greet eachother, talk and spend time virtually from a distance and even have toast together.

Every family, after the never ending Christmas dinner, is entertained at the table for the moment of the traditional Neapolitan bingo, this famous Christmas game was created in Naples in the 18th Century. ‘La tombola’ is an “Italianized” version of bingo where each member of the family has a number of cards (maximum 6 cards per person) in which fifteen numbers per card are scattered randomly and only one member of the family, usually the nicest, has at their disposal a board on which all the numbers from 1 to 90 are shown, and a bag called “panaro” where there are all the pieces are numbered in the same way.

Once the prizes are divided according to the number of cards purchased, the person that has the board begins to randomly select the numbers from inside the panaro, and announce the number released to the other players. What makes the Neapolitan bingo game fun, as well as exciting, is that each number is associated with a different meaning that sometimes has scurrilous and irreverent references. Before the entire table is completed, and therefore “bingo” is completed, minor prizes are awarded for smaller results, such as both, the three, the forth and the fifth based on the numbers that complete the row. Furthermore, the tradition of the Neapolitan bingo requires that beans, chickpeas, tangerine peels or dried fruit shells are used to cover the numbers called, which continue to nibble between one number and another.

The City of Sorrento has always been lit up for the Christmas Holidays for years and years, since the beginning of November and traditionally every street is decorated with bright lights that attract thousands of visitors from all over the world to admire its beauty each year.

This year, in a climate of greater savings and respect for the economic health crisis we are experiencing, all lights are still off and are yet to be turned on, but with some photos from past years I want to give you some memories of Sorrento at Christmas time to make you dream a little too.

Imagine this, the large Christmas Tree in Piazza Tasso with all the buildings around decorated with lights, the Walt Disney village set up for children, Corso Italia (the main shopping street) and The Old Town, where it is possible to visit the ancient city among traditional shops, enticing scents and characteristic alleys. 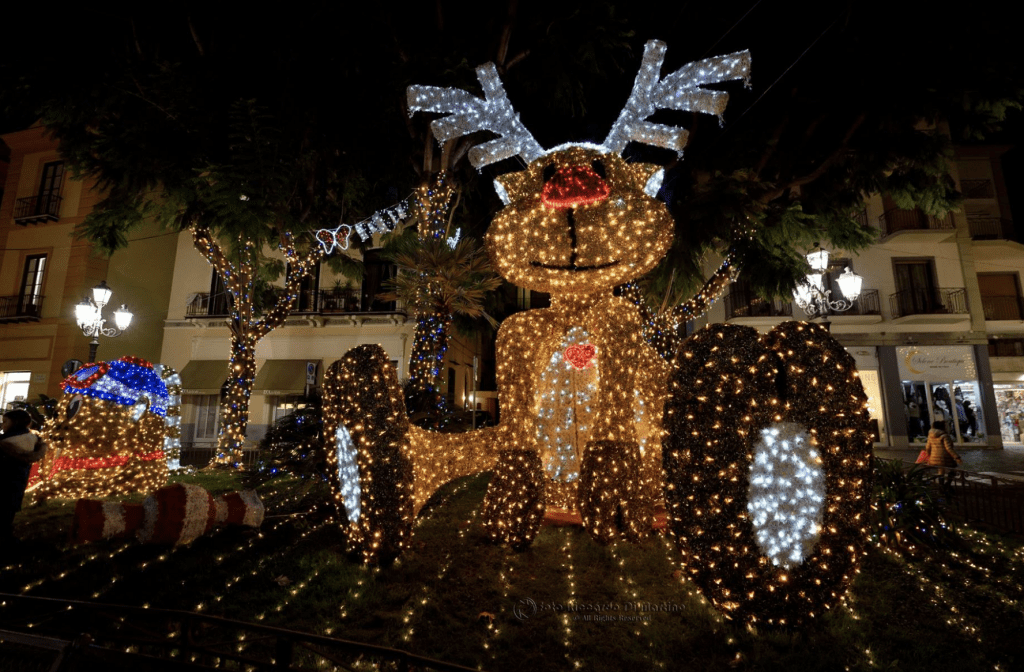 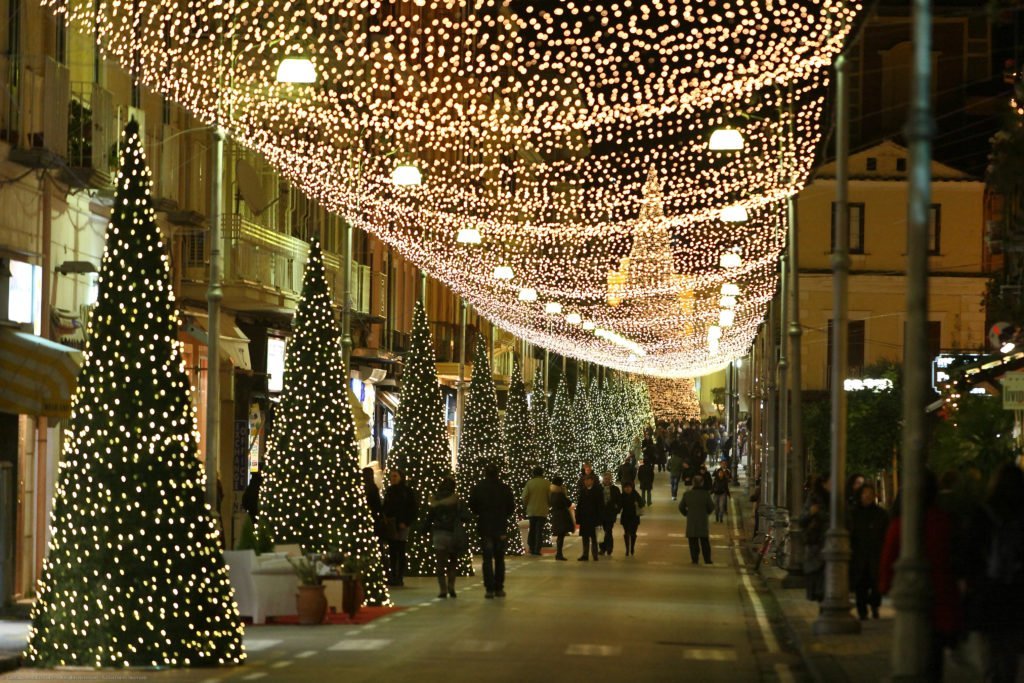 Christmas and Food make the perfect combination and here in Sorrento every year, around the Christmas period we prepare to host numerous events dedicated to food and wine and more food. In addition to the Christmas markets and pastry shops offering traditional zeppole and sweets, this year there will be no street food events dedicated to Made in Italy Street Food and neighborhood parties.

But the event that will be missed the most will certainly be the unmissable event that takes place every year on Christmas Eve in the Old Town of Sorrento, at the Pizzeria da Gigino: Neapolitan popular music, endless fried pizzas with sauce and basil and rivers of beer to celebrate Christmas Eve together and toast to happiness. Besides, what is a Christmas without music? From the Jazz style to Neapolitan popular music, from Christmas choirs to classical music, up to the bands and folk group that brings joy to the streets and squares of Sorrento.

Throughout the Christmas period, from morning to evening, there is always music that can be heard from somewhere close by and an air of celebration in the streets: a varied offer, the one organized for the Christmas holidays, which still made a festive atmosphere magical.

New Year’s Eve without Partying, but with the people I love, my Family

New Year’s Eve in Sorrento, as in any other part of the world, is synonymous with toasts, music and entertainment and unfortunately this year everything will be different with a strict curfew in place for the whole night. Usually, we start in the morning with end-of-year concerts and then toast with friends until sunset, then we all wait all together at 18.00 in Piazza Tasso for the “ciuccio di fuoco”: consisting of music and folklore traditions and the lighting of the cardboard donkey that symbolizes the old year that is passing and to toast the beginning of the new one. This year there will be no concerts or parties, but New Year’s Eve-Day curfew will be from 22.00 on 31 December until 07.00 on 1 January 2021.