Giuseppe is a Property Manager, Travel writer & Media Planner who has born and raised in Sorrento, Italy.
Travelling to Naples in 2021? Discover our Top 3 Best Pizzeria's to try the famous Neapolitan Pizza in Naples with our Complete Food Guide

Giuseppe is a Property Manager, Travel writer & Media Planner who has born and raised in Sorrento, Italy.
Travelling to Naples in 2021? Discover our Top 3 Best Pizzeria's to try the famous Neapolitan Pizza in Naples with our Complete Food Guide

Top 3 Pizzeria’s You Must Visit in Naples

While on holiday in Sorrento and Amalfi Coast, even if just for a few days, the City of Naples must be one of the places you visit! Not only is it known worldwide for it’s vast history, religious traditions and authentic bustling streets but of course, it’s also the homeland of Pizza. During  the 18th century, pizza was a dish mainly eaten by the lower classes of Naples, made very simply from dough, olive oil and tomatoes. However, the dish soon became very popular among the wealthy and Naples turned into a food haven for all classes.

Naples also has its very own style of Pizza, first the classic Margherita which consists of a thin base of pizza dough, topped with tomatoes and mozzarella, secondly the Marinara which doesn’t have cheese but instead oregano and garlic. Lastly, a common street food is the Pizza Fritta, a deep-fried pizza similar to a calzone but better. If you’re looking to taste the best pizza in Italy, Naples is the place for you! 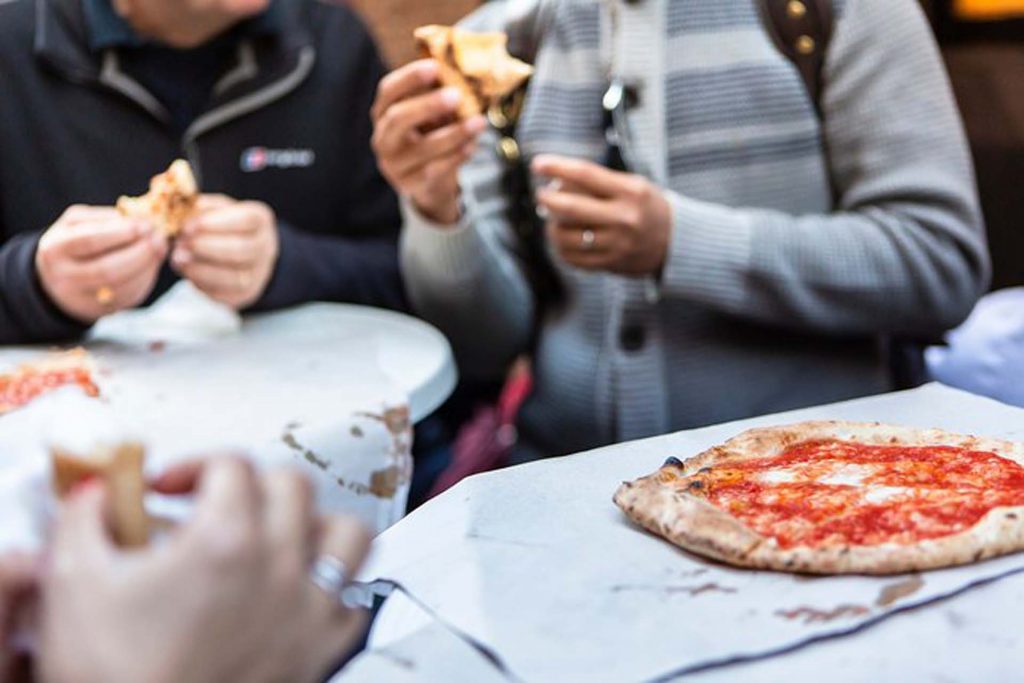 Amongst the famous pizzeria’s in Naples, L’antica Pizzeria da Michele first opened in 1870 making it one of Napoli’s oldest pizzerias. Even to this day you will always find a queue of people outside waiting to get inside as it’s also very popular amongst the locals. Inside the dining room is very simple and casual, it’s almost certain that you will share your table with others as this famous Italian Pizzeria is always full. For this reason we reccomend getting there early to minimise queuing or wait til after the lunchtime rush.

This is also where the famous film “Eat, Pray, Love” starring Julia Roberts was filmed and they even have a photo of her hanging inside the restaurant! Considered Naples best Pizza Maker, Gino Sorbillo has won a number of awards with the most recent being winner of the Championship of Neapolitan Pizza. Located in the heart of Naples Old Town surrounded by ancient buildings, bustling streets, sounds of scooters and laundry drying from the balconys you will find Pizzeria Antonio e Gigi Sorbillo. The two classic flavours are Margherita and Marinara however the Pizza menu changes every 3 months and all of them are made with organic flour and freshly grown products which will leave you wanting more.

Located in the heart of the lively and historic borough of Sanità, Concettina ai Tre Santi is another excellent pizzeria is a family run restaurant and has been run by the Oliva family for over 60 years, like almost all the best pizzerias in Naples. It’s very famous for it’s fried pizza and is one of the most traditional pizzerias in Naples. Through every generation they have managed to re-invent themselves while still sticking to their traditional roots which you can see reflected in the menu. Their pizzas are modern, traditional and imaginative featuring various fried specialities.