Giuseppe is a Property Manager, Travel writer & Media Planner who has born and raised in Sorrento, Italy.

Looking to visit Sorrento, Capri and the Amalfi Coast in 2022 but wanting to know what the current situation is regarding COVID-19? Discover our article below to find out how safe the Amalfi Coast is, information on Face Masks and Social Distancing as well as all of the Latest Updates.

At least twenty minutes from Sorrento, positioned between the sky and the sea, one of the most beautiful and lush islands in the world: the Island of Capri. Famous all over the world for its landscapes and social life, for its breathtaking grottos and luxurious shop windows, Capri is one of those places that will win over your soul.

From the moment you arrive at the Marina Grande, the port of Capri, you will feel the energy and vibrations that inhabit the island: whether you’re visiting for a daily tour or for a few more days, here are some of the places you must absolutely visit in Capri.

The Grottos: Blue, White and Green

Famous throughout the world for its grottos, and amongst them all the Blue Grotto, one of the most visited attractions of the island. In addition to the enchanting turquoise reflections of its crystal waters, it is the experience of entering inside the grotto that makes it truly exceptional: it is only possible to access by the famous boatmen on traditional ‘gozzi’ boats, who by rowing a little and holding to the peaks, will guide you into this magical cave.

We advise you not to also miss the opportunity of visiting the Green Grotto, located on the southern side of the island, immediately after the Marina Piccola. Its unique reflections and emerald tones of crystal clear water will reward you with a unique experience.

The icon of the worldliness and life of Capri, the Piazzetta is considered the centre of the island: it’s from here in fact that the alleys and the lanes join, leading you towards the most panoramic places and luxurious boutiques. A stop you simply must visit for those who would like to, or for an aperitif of coffee, can take their seats in one of the four corner bars. The Clock Tower, known as La Torre dell’Orologio, overlooks the Piazzetta and a stones throw away from here you can take the funicular to take you back to Marina Grande.

From the Piazzetta, along the street Vittorio Emanuele, between the shops and the narrow streets you will cross, you will find yourself entering into the heart of Capri. To welcome you, the scent of waffles prepared in the moment of the Gelateria Buonocore, I recommend you to try the fantastic taste of Capri, and subsequently one of the most famous night clubs in Italy, the Taverna Anema e Core.

At the end of the road, the Hotel Quisisana which leads you towards Via Camarelle, the famous shopping street of Capri. Elegant and clean, here you will find the islands most luxurious boutiques of all of your favourite designers, hotels and sumptuous villas hidden behind beautiful gardens and hedges. 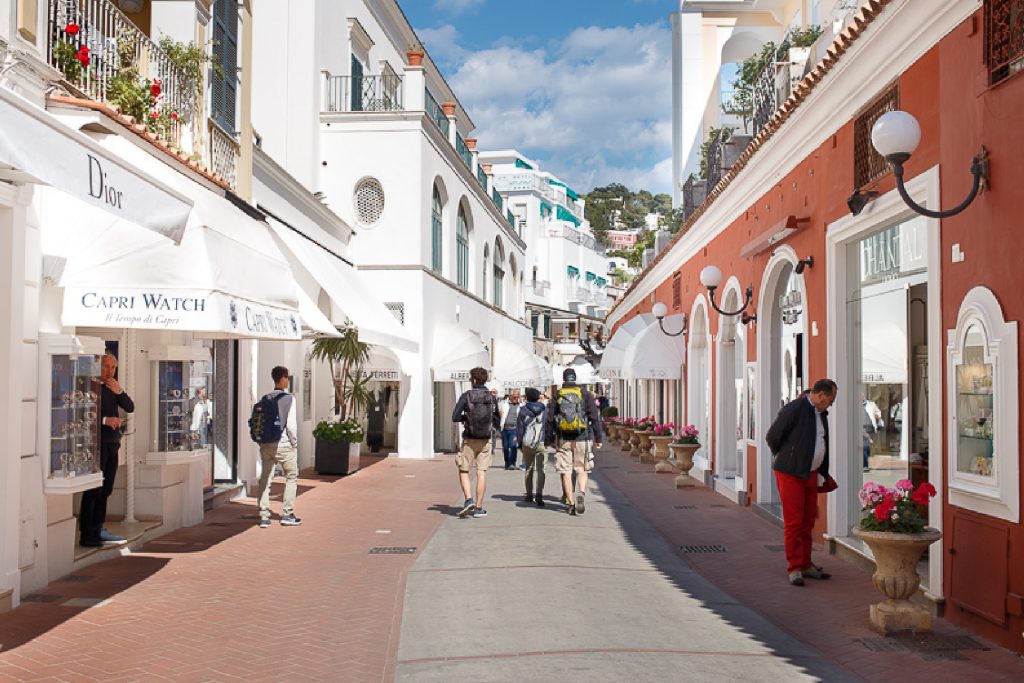 MOST INSTAGRAMMABLE PLACES IN CAPRI

Best Sights | Things to Do

Continuing along Via Camarelle, you will come across Via Tragara, one of the most picturesque streets of Capri. The road, surrounded by gardens and villas where artists and famous people stay, leads you to a wonderful viewpoint that offers you one of the most breathtaking views of Capri.  From the panoramic viewpoint of Via Tragara, it is in fact also possible to admire the Faraglioni and the bay of the Marina Piccola and underneath the viewpoint, you will find a marvellous street that takes you to see the Natural Arch and Pizzolungo.

Following the path you will find one of the masterpieces of Capri’s architecture, the Villa of Curzio Malaparte immersed in-between the rocks and the greenery of the island.

It is precisely at this viewpoint of Via Tragara that the Pizzalungo path unwinds, a fantastic path that runs along the western side of the island and overlooks the Faraglioni, up until the Natural Arch. It is recommended to take this walk starting from the Matermania area, then starting from the Natural Arch to admire Villa Malaparte and then ends right at the Tragara viewpoint. 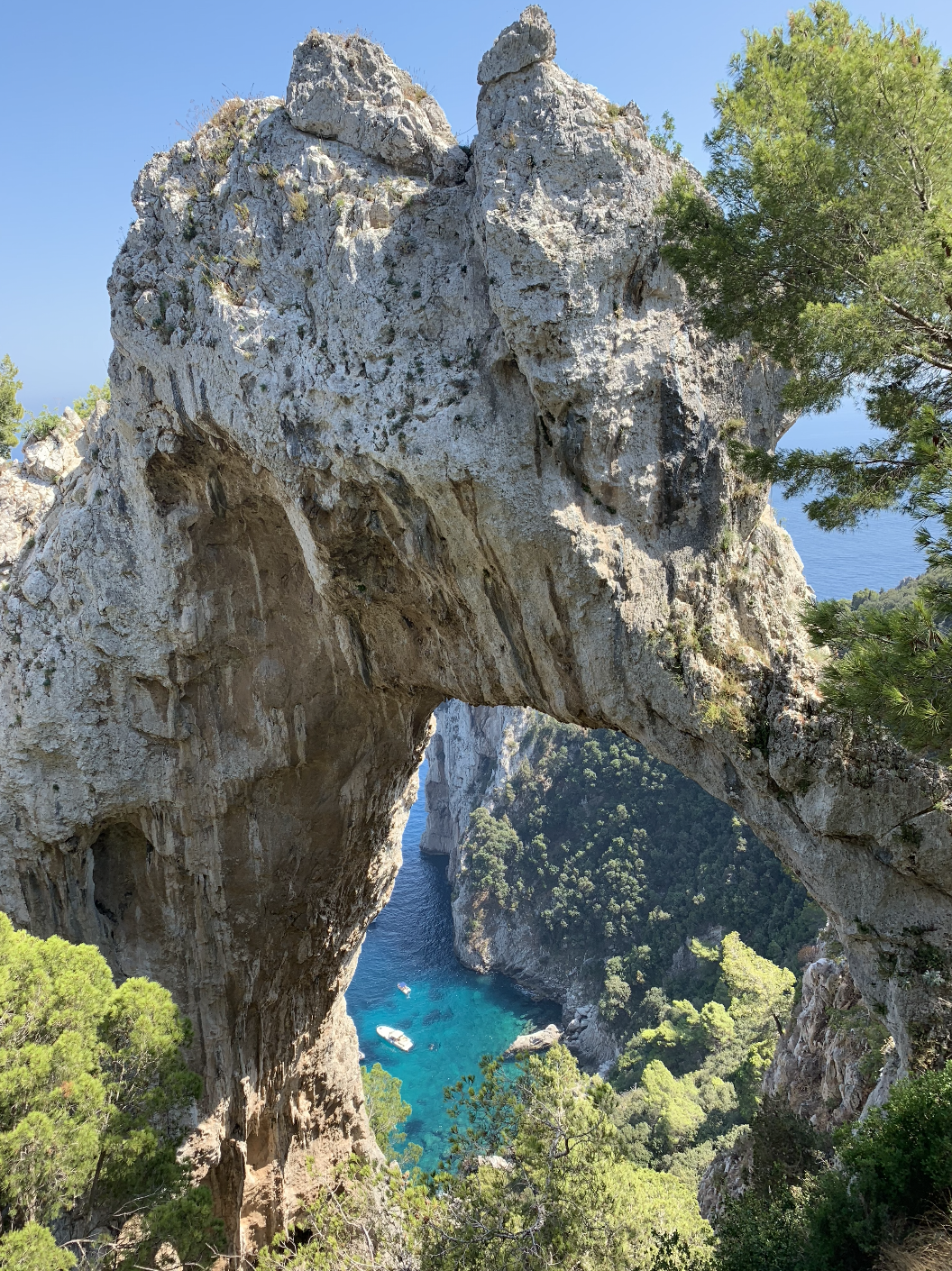 The walk, which can take up to two hours, ends right at the Tragara viewpoint and its view of the Faraglioni and bay of the Marina Piccola. Just before you arrive at the viewpoint there is a path that allows you to reach the Faraglioni and located at the foot of the giant rocks you can find a beautiful restaurant, il Ristorante da Luigi and the Fontelina beach club.

Via Krupp and Giardini di Augusto

Known worldwide for its characteristic zig-zags and for its fantastic panoramas, the Via Krupp, was designed by the well known German industrialist AF Krupp and was built in 1902. It is said that the German entrepreneur who stayed at the Quisisana Hotel, to reach his yacht that was anchored in Marina Piccola faster, purchased the ‘Fondo Certosa’ where the Gardens of Augustus party stand and built the roads that with their narrow turns and bends leads directly to the sea.

Nowadays for safety reasons because of the risk of falling rocks, the road is almost always closed and therefore can only be admired from the Gardens of Augustus, which are located above Via Krupp. The cost of visiting the gardens, in the month of April to October is €1. You can get there from Piazza Umberto I, by foot from Via V. Emanuele, Via F. Serena or Via Matteotti each route will take you 15 minutes.

With its 598 metres, the Monte Solaro, is the highest peak of Capri and offers visitors a spectacular view of the island, the Gulf of Naples and Salerno towards the island of Ischia. Reaching this point is very simple: from Marina Grande or Capri, by taxi or bus, after 10 to 15 minutes you will arrive at Piazza della Vittoria in Anacapri.

From here, you can take the chair lift on foot by Via Capodimonte you will arrive at Via Monte by taking the path. The descent is on foot and is certainly easier and lasts about an hour, we recommend you to take the small detour to the Hermitage of Cetrella, located in the valley of Cetrella named after the grass that abundantly grew in this area.

With a breathtaking view of the Gulf of Naples and about 300 metres above sea level, Villa San Michele strongly dominate the North side of the island of Capri. Surrounded by an enchanting garden, it was the word of the Swedish doctor Axel Munthe, who visited the island for the first time to treat himself from pneumonia.

For many years the villa has been used as a museum that houses many Roman finds, from column to vases and marbles, it’s garden is full of beautiful flowers, columns, pergolas and centennial cypresses, and above all here you can admire the most spectacular view of the Gulf of Naples.

At the most extreme point south-west of the island of Capri, there is the famous Punta Carena lighthouse, who’s lantern was built in 1866 and is considered on of the most important in the Tyrrhenian Sea, second in power after that of Genoa.

Villa Lysis, which can be visited today thanks to the restoration carried out a few decades ago, is a villa designed in 1905 on behalf of French poet, Count Jacques d’Adelsward-Fersen who then made it his home. Parisian by birth and descent of the Swedish family of Fersen, the count came from a very wealthy family and was a leader in the steel industry.

Upon the death of his father and inheriting his heritage, Fersen knew the island of Capri, where he later moved permanently following a conviction for ‘insulting the public morals and corruption of minors.’ In Capri, the project began for his majestic home, Villa Lysis, initially called La Glorietta, is located in the northern side of the island.

Designed in 1906, it was built on the land on top of a hill at the north-east end of the island, near the place where, two millennia before, the Roman emperor Tiberius had built his Villa Jovis. The name Villa Lysis, is a reference to the Plato Liside’s dialogue on the theme of friendship and according the modern critics, of homosexual love. Lysis Association, founded in 1986 and the Municipality of Capri, can be visited today.